I’m back in my hotel room after a very long day at WordCamp UK. I’ve had a fantastic day. There were some good sessions, it’s a pity I didn’t get to see them all. That whole multi-track thing can be frustrating.

My own session got off to a poor start with technical difficulties. Eventually solved, but it threw me a little. I didn’t manage to fill my 1 hour slot, but it seemed to go down well enough. I got some good questions and feedback later.

It was great to see Matt again after so long. We were both interviewed and filmed after the last session by two different people, and I look forward to seeing the recordings.

I then went for a great meal with Matt, Westi, and a small group of people and it was really nice to just chat and chill with a fantastic bunch.

I finally got round to creating and launching my new corporate site at zed1.com, a mere 7 months after I started the business!
It’s one of those things that kept getting put on the back burner, but I’ve finally done it, though it’s not complete and really only a temporary logo and design.

Still, I wanted to get it done in time for WordCamp UK in Cardiff this weekend.

I’m at the Informatology conference today and had my first WordPress hands-on workshop for about 15 delegates earlier.

I am shocked at how short 45 minutes is! I felt like I babbled at break-neck speed and got nowhere.

However I did cover about a third of my agenda, touched on a few other bits, and got some good feedback from people.

I have another session this afternoon. I will have to trim it, and do more of the hands-on myself.

A client site I have been working on just went live today. It’s a public consultation site for the Law Commission.

They wanted a commentable summary version of their current consultation paper and a general discussion forum. The original consultation paper, “The Admissibility of Expert Evidence in Criminal Proceedings in England and Wales”, runs to 98 pages, so the 15 page summary (plus end notes) works much better online. 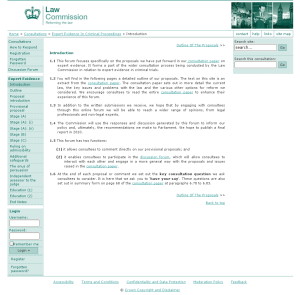 It’s built on WordPress, of course, and the forum is BBPress

Check it out and, of course, it is a public consultation, so feel free contribute (registration required).

The new web site for my daughter’s school, St Bede’s College has finally gone live today. This is great news! It is a much better looking replacement for their old site and will give a much needed boost to their on-line presence.

Of course, it is built completely on WordPress, with a ton of plugins, a couple of custom widgets, an original design by an ex pupil, and a fairly sophisticated theme by me. I’ll give more details shortly. It should look OK in most browsers. I’d appreciate a comment if anyone spots any major breakage.

The hardest part (or at least the part that took me the most time) was converting their old pages which were written as old-school 90’s stylee static pages — chock full of presentational HTML — into Plain Old Semantic HTML (POSH) ones. As far as I can tell every page nowvalidates as XHTML 1.0 strict.

The small team of staff members who have helped me design the architecture of the site, up date the content, and add new stuff, have done a marvellous job. Especially whilst coping with all that goes on at the beginning of a new school year. 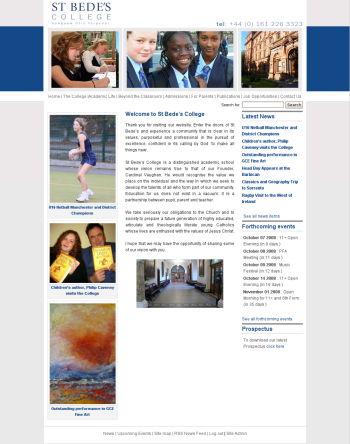 Go check it out.

With fairly short notice, I have to fly to sunny Sydney on business today. It will be my first time in Australia, I’m quite looking forward to it. Though how much of Sydney I’ll get to see I’m not sure. I have a full week of meetings once I get to the office over there.

I will at least have the weekend beforehand to recover from the 26 hours travel time and cram in some site seeing.

I’ll try to blog more as I go along.

I got a pingback from Adrian Trenholm who has written a great piece, 10 tips for safe cycling, partly inspired by my recent accident. He lists

and more, each with a good explanation why. I’d like to add a couple more points:

Look after your bike. In the past I have found that a combination of worn brake blocks, stretched cables, and wet rims meant that I suddenly found nothing was going to slow me down!

Don’t run red lights. This is really part of Adrian’s number two item, but I suspect the single most annoying thing cyclists do to city motorists is ignore red lights. Or rather, not ignore them, but go through them anyway. I know it annoys me when I’m driving, and I never do it when I’m cycling. Just remember that those drivers you’ve just left at the lights will be passing you in a minute. Only now they’re annoyed with you. When you need to swerve to avoid that pothole, they’ll be much less inclined to give you the room you need.

Adrian also has a great discussion, “Never, ever get into a fight with a ‘bike-hater.'” in the same post. I couldn’t agree more. I sometimes shock myself when I react badly to a car ‘buzzing’ me, or to a beeped horn because someone thinks I shouldn’t be on the road. It’s easy to want to be aggressive when you are ‘bullied’ by a car, but as Adrian says…

Let’s be clear about this: you might be in the right, but your antagonist has over a ton of metal at his disposal. When a cyclist mixes it up with a motorist, the cyclist will always lose. Just let the motorist go.

Don’t let us put you off though. Cycling to and from work is a great way to get fit. My trip home takes pretty much the same time as public transport, so I’m not taking more time out of my day. Because it serves a purpose (getting me home) it’s much easier to stick with it than, say, going to the gym. When I had a gym membership it was easy to say to myself “I’ll leave it tonight and go tomorrow… or next week”.

Give it a try. Get that bike out of the shed and try riding to work a couple of days a week.

In other news, I had another accident on my bike yesterday. On my way home from work, a truck pulled out on me whilst on a roundabout (here is a great introduction to roundabouts for Americans). This ought not to happen as I had right of way, but I can only assume that either the truck driver didn’t see me, or that he assumed that I was going slowly. As a result, he pulled out on me; slowly because it was a big truck; and I had to swerve round him. Unfortunately he was too slow for me to get completely round the back of him. With a 4 or 6 inch high kerb approaching, I had to turn the bike and slide it and thus me along the floor to stop.

I hit the floor hard and slid to a stop. As I got up a chap pulled my bike off the road and started asking if I was OK. A couple of other people kindly stopped to check too. The truck driver was, of course, long gone. My arm was badly grazed and my ribs hurt. After a couple of deep breaths, I figured they weren’t broken. Luckily too, my bike wasn’t damaged, though my shorts now have a hole, and the screen on my mobile phone is cracked and it only shows about a third of the display.

So, after thanking the people who had stopped, I got back on my bike and cycled the rest of the way home — I had about another 9 miles to go. By the time I got home, my ribs were hurting a lot and I knew I would be off my bike again for at least a few days. That’s a real shame too as I’d just got back into doing a full 70 miles a week.

After some more hassle I won’t go into right now, Jan gave me a lift up to our local A&E department. It was busy and I ended up waiting for two and a half hours to see a doctor. He listened to my chest and decided nothing was broken or even cracked and that I didn’t need an x-ray. I waited another half hour to get a dressing on my arm and then made my way home.

I’ve had to have the day off work today, it’s quite painful to move around. When I sit or stand still, it feels fine. But as soon as I move the pain kicks in. I’ll probably be off work tomorrow too.