I blogged about the 11th anniversary of WordPress’ beginnings over here

Getting settled into Wordcamp UK. Listening to the first session “Building Community” by Chi Chi . Interesting discussion, though not too WordPress related, but then WordPress is only a tool for doing other things.

Yes, interesting in an unexpected way.

I’m back from WordCamp UK. It was a fantastic weekend and I am very pleased to have met so many interesting and talented people.

The presentations and talks were very informative, and I learnt a lot, which is always a good thing. I have to thank my fellow question time participants and fellow code surgeons for our sections.

There has already been talk of next year’s WordCamp and I can’t wait.

I felt this one just as I was trying to get to sleep this morning. It shook the bed and rattled the wardrobe. Associated Press reported it as the Second largest UK quake since 1984. The BBC reported it as the biggest earthquake in the UK for nearly 25 years.

The rest of the house slept through it, including the dog!

Of course, for old timers on this blog, this isn’t the first time I’ve mentioned earthquakes 🙂

I would like to wish you all a “Merry Christmas”, “Happy Kwanzaa”, “Happy Hanukkah”, “Yule Blessings”, or just plain old “Seasons Greetings” whatever you may celebrate at this time of year.

Wow! Someone dumped a car at the back of my house tonight and torched it.

I was working on the laptop when I heard a loud noise outside, clearly close to the house. I work in the cellar and only have a narrow glass brick view to outside. I looked up and saw an orange glow through the glass. I rushed up stairs to see a large fire at the back of the house.

At first glance I thought it was my car! I second later I realised it wasn’t, but that the car that was burning was only feet away from mine.

I grabbed the car keys and dashed out of the house. I managed to dial 999 on my mobile phone whilst opening and getting in to the car. As the emergency service answered the call, I got the car started. At that point two police cars arrived. I tried to explain to the operator, what had happened, that the police were on the scene, at the same time as I tried to move the car away to safety without first reversing into the burning car!

I managed to get the car moved, having put my phone down. I didn’t get to move it far as the fire service had arrived and parked across the road. I got back on the phone and explained to the operator (now inexplicably from the ambulance service) that the police were on the scene and I didn’t need an ambulance.

The firemen were very efficient and had the fire out in less than 5 minutes. I had noticed that all this time there was a cameraman on the scene. At first I assumed he was from the police (he arrived with them), but he explained that he was from the BBC. He was filming for a program that sounded like “Car wars” about car crime in Britain. I gave him a very short interview. I have no idea if or when it will appear on TV.

I didn’t have the wherewithal to grab my camera when it all started happening, but I took a couple of picture afterwards. 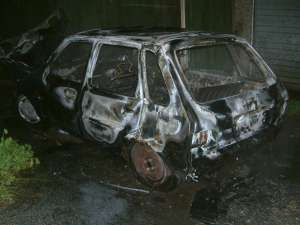 This is all that’s left of the car. It looks like it was an old Rover mini metro. 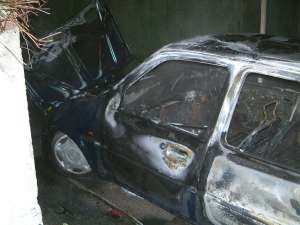 The bonnet blew open at one point. 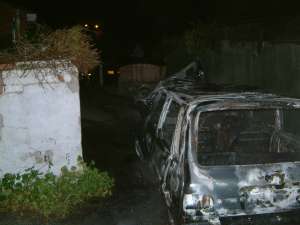 You can see how close it was to the wall at the back of the house. The bush over the wall used to have leaves. They are now all shrivelled and burnt. 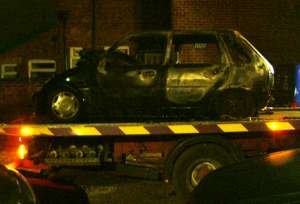 Within an hour, a guy came to tow the burnt shell away. 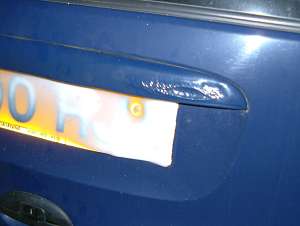 More expense on the car! The white on the number plate is not over exposure from the flash, the plastic has turned white and started to bubble!

Update: I should point out that throughout all this Jan, Jamie, and all the neighbours but one slept on peacefully!

I would like to wish you all a “merry Christmas”, “happy Hanukkah”, “happy Kwanzaa”, or just plain old “seasons greetings” whatever you may celebrate at this time of year.

I wish you all the best.