I knew as soon as I sold my last bike that I would want another one. Within three weeks of saying goodbye to the Hardrock Sport, I had a new Specialized Hardrock XC. 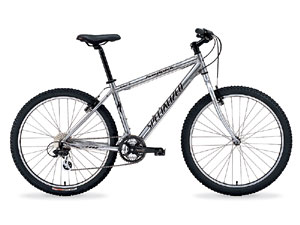 It’s less of a bike than the Hardrock Sport but that suits me fine. It doesn’t have front suspension negating the weight savings of the Aluminium frame or absorbing my energy when I power on. I miss those great disc brakes though, but maybe I’ll get them fitted on this one at a later date.

So I’m back riding after an 8-month break. I started off slowly. I cycled from home to train station in the morning. Then get the train to work. There’s no component at the other end, my office is next to the train station. I would then catch the train back to my local station and then cycle back home. A hair under 5 miles a day. A good start. It was no challenge at all.

I did two weeks of that and then decided I was ready to cycle all the way home in the evening. That journey home is eleven and a half miles! Much more of a challenge.

I was not surprised to find that the first couple of hills were very hard. They are short but steep. I soldiered on with some sections being quite a strain. But then, around half way home, I suddenly realized that it wasn’t hard work! I was cruising along at a comfortable 15mph, legs pumping but not working hard. Breathing was regular, not laboured. Just like 8 months ago. In all the journey took 55 minutes to do the 11½ miles.

I’m amazed at the human body. With the trip home from my previous job only 7½ miles and having had 8 months off the road I really thought I would struggle to do that distance . I guess my fitness levels must have been pretty high. The next four days were pretty much the same, though my time home got longer towards the end of the week. I think that first Friday’s journey took 65 minutes.

Since then, I’ve done another three weeks. I’m clocking up a little under 70 miles per week. The journey has become slightly easier. I have been consistently taking 55-60 minutes. Tonight was definitely under that. There is one stretch about ¾ of the way through that has been a real struggle, it is long hill. Not too steep, but quite long and with a steeper bit in the middle. A change of gearing strategy has helped there and I’m managing it better.

Over the next few weeks I want to increase my morning distance until I’m doing the whole journey by bike. That will be nearly 125 miles per week. That should keep me fit!

Work, Cycling, and The Weather